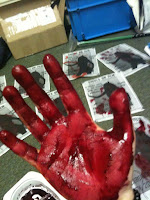 Last year, for the first Women in Horror Recognition Month, I organised a small one-day film event to showcase some of the female talent in the genre. A great crowd turned out and watched shorts, features and had a great discussion about women in the genre. Ghouls on Film was born.
As much as I want to do the same this year, I simply can’t afford to take the time off work that it’ll require. Apologies to anyone who was looking forward to another event, and I really appreciate all support I’ve received in trying to figure out if an event this February would be possible. Needless to say, this doesn’t mean Ghouls on Film won’t resurface again in the future!
Anyway, the point of this post is not to bemoan the lack of Ghouls on Film, it’s to encourage you – yes, you – to get out there and put on your own event. As far as I’m aware, Ghouls on Film was the only event of its kind put on in the UK last year for WiH month (and please correct me if I’m wrong about this!) and so I’d love to see at least one event on these shores this year. If I could do it, so can you. Find a venue, find some films, find some like-minded fiends and you’re set. And if you do put on an event - let me know!
And if you don’t want to put on a public event? Get your mates round, and stick Nosferatu in your DVD player. Or Bride of Frankenstein. Or Halloween. Or Slumber Party Massacre. Or Dead Hooker in a Trunk. I’ll still be having a film night in honour of WiH month, and so should you! What better excuse is there to enjoy the genre’s finest females?
(Special thanks to 10 Feet Tall, Cardiff, who were almost my venue!)
Posted by Stonecypher at 14:39 2 comments:

Women in Horror Recognition Month, February 2011
Posted by Stonecypher at 06:25 No comments: